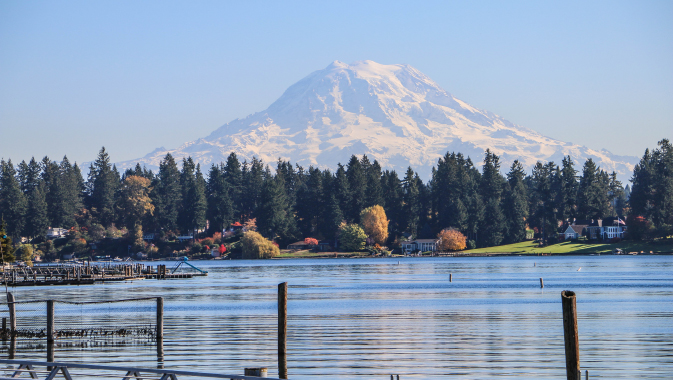 Big changes have taken place in Lakewood, Washington since Business in Focus ran a feature article about the city in February 2017. Over the last two years, Lakewood has seen an influx of jobs, construction projects, and business openings. What remains unchanged is the sense of optimism expressed by Lakewood leaders about the state of their city. This optimism is reflected in the city’s continued municipal investment in civic improvement initiatives.
~
“For the four-year period, 2015 to 2018, we will have completed over fifty transportation projects with a value of over $54 million. As we look out into three years, 2019 to 2021, we’re looking at ten major transportation projects with an investment value of over $33 million. For a city of our size and scope, that’s quite phenomenal,” states City Manager John Caulfield.

Recent capital investment initiatives are wide and varied. “Many of these projects are focused on transportation improvements, but some happen to involve liveable city amenities, including those that are consistent with our non-motorized transportation plan. One project is a pedestrian and bike loop around Gravelly Lake. The first itineration of [the project] involves about $2.4 million worth of street, sidewalk, and lighting improvements,” says Deputy Mayor Jason Whalen.

The city is also working on “a complete street project called Motor Avenue,” that “will be a plaza-type festival street,” for various events, based in the “historic colonial district of the city,” he adds. Motor Avenue should be completed before the end of 2019. The city also recently invested in a pavilion amphitheatre for concerts in its 350-acre Fort Steilacoom Park.

Alongside capital investments, business has been booming. A warehouse and distribution facility called the LogistiCenter has opened in Lakewood near Interstate 5 and boasts 210,700 square feet of space for companies. Last year, the LogistiCenter acquired a well-known tenant in the form of home appliance manufacturer Electrolux. The centre is run by Dermondy Properties and is one of several in a chain across the U.S.

The city also wants it known that the Woodbrook Business Park, which covers 150 acres, is open for development.

As it stands, Lakewood’s available industrial space might soon increase; the anticipated sale of a school district property is expected to add even more light manufacturing logistical industrial space to the city, according to Whalen.

“We have seen a twenty-eight percent increase in the value of investment in economic development in Lakewood. And that’s only for three-quarters of the year,” says Caulfield, comparing figures to the same period in 2017. “Also, job growth within Lakewood continues to increase. In the past, a lot of that job growth was focused on retail. But in the last few years, many new businesses coming into Lakewood offer family-wage jobs – higher paying jobs – driven by healthcare, professional services, engineering. Things along those lines.”

According to an economic development report from the City of Lakewood, the number of jobs in town increased by nearly fifteen percent between 2012 and 2018, from 29,714 to 34,096. As Caulfield notes, positions in health care and social services exploded, going from 9,192 in 2012 to 11,158 this year. On top of this, new retail outlets and restaurants have opened since the last profile ran while existing companies have expanded.

Downtown improvement plans are coming along as well. There is a discussion “to develop some kind of downtown park as well as continued beautification [to create] a greenway and boulevard type effect throughout the downtown,” says Caulfield.

Lakewood is home to two post-secondary schools: Pierce College-Fort Steilacoom and Clover Park Technical College. “There is an over 67,000-square-foot advanced manufacturing training facility under construction right now at Clover Park Technical College. We’re very excited about that. It will provide much-needed education for that industry. Both colleges have state-of-the-art health sciences buildings, and we’ve been told the nursing department at Pierce College has a tremendous waiting list to get into that program,” reports Newton.

Advanced manufacturing fits in nicely with the aerospace sector, which is a huge industry in the Pacific Northwest, notes Newton. The development of strong but lightweight composite materials has applications in aerospace, something which could benefit other manufacturing industries such as automotive, she adds.

There is plenty of work to go around in Lakewood, and the city remains an affordable place to live. The median sale price of a house, as of August 2018, was $289,200. The Lakewood economic development report states that the city’s population stands at 59,350 with a median age of 35.6 years.

Why is Lakewood booming? There are several factors, including a very convenient location; the city is situated near the Interstate 5 corridor and the ports of Seattle, Tacoma, and Olympia. A business-friendly local government helps too. Lakewood authorities do not charge business and occupation (B&O) tax, set low business licensing fees, and offer “predictable permitting, to ensure that businesses get up and operating as quickly as possible,” says Newton.

Lakewood also features three recently-designated opportunity zones, she continues. An opportunity zone, as defined by the Internal Revenue Service (IRS) is “an economically distressed community where new investments under certain conditions, may be eligible for preferential tax treatment.”

Lakewood features plenty of incentives for new residents as well as new businesses. Lakewood Mayor Don Anderson waxes eloquently about the community’s physical beauty and convenient locale. “I think, concurrent with my personal choice, it is the natural environment. We have lakes, we are relatively densely covered with forest, and we have beautiful mountain views,”
he says.

“At the same time, we have relatively immediate access to the I-5 corridor. We have recreational activities, both for the mountains and ocean. It’s a life balance question. We’re attempting to provide more employment opportunities locally so people can enjoy that environment without having to commute a great distance to work,” explains the mayor.

Also, property owners are encouraged to make housing improvements in multi-family residences via tax breaks. “We have a multi-family tax exemption program available in some of the areas in Lakewood, which is an exemption from property taxes for a period of eight or twelve years depending on the scope of the project,” says Newton.

Residents can take advantage of ample recreational opportunities in Lakewood’s parks and waterways. The latest SummerFEST – an annual event featuring a triathlon, car show, food trucks, entertainment, and more – was “the largest we’ve had, with 42,000 attendees,” says Whalen.

Other community activities include an annual Martin Luther King recognition event. This year, the city will be consolidating some holiday events, including a Christmas tree lighting, 5K race, and Candy Cane Lane holiday market.

Lakewood continues to reap enormous benefits from being close to Joint Base Lewis-McChord (JBLM), a huge military facility. In fact, a recent study, by municipal and academic researchers, plus the South Sound Military & Communities Partnership, discovered that the city has been actually underestimating the economic impact of the base.

“The recently completed economic analysis [conservatively estimated] that the economic benefit that JBLM has on our region is between $8.5 billion to $9.3 billion annually. In the past, the number we’ve been working with has been about a third of that: $3 billion. It further shows the importance of JBLM on Lakewood and the region,” says Caulfield. The City of Lakewood is also situated near the Camp Murray facility for the Washington National Guard.

Lakewood is paying very close attention to a state construction project on I-5 that might involve a pair of exchanges near the city. The $500 million highway construction project will improve the commuting experience for Lakewood residents and freight mobility. “Planning is nearly complete. The surveyors are out,” says Anderson, about I-5 construction.

In terms of challenges facing Lakewood, Whalen says, “I think the biggest challenge continues to be a focus on ensuring more economic development and better housing stock. We want to make Lakewood a more economically viable and vibrant place.”

Having said that, he notes that Lakewood’s finances are on a very sound footing, and this bodes well for future development. “Lakewood has come a long way in terms of development activity – both economic and liveable city amenities. Lakewood has become very financially stable. We have come a long way since the downturn of 2008. We’re right-sizing our budget; we have a very healthy and stable reserve and have received accolades from state auditing entities about the transparency of Lakewood’s budget and budgeting process. This is the foundation for all we do,” says Whalen.