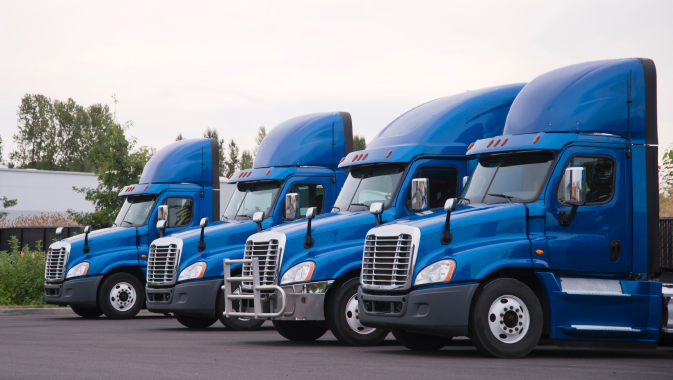 The idea of the truck driver has reached a level of romanticism in modern culture: a hard-working fleet of men and women who drive through the night from one end of the country to the other, hauling the necessities of life along with them. While our culture and media tend to amplify the truth of those we admire there is no denying that the workforce behind Lavalle Transportation (LTI) strives to meet the expectations of a demanding public.
~
Originally launched in 1994, LTI began its life as a car carrier, transporting automobiles around the country. Founders Randy LaValley and Bill Lavallee made it a point to go above and beyond in meeting the expectations of their customers, and the company, which started with just one truck, quickly expanded its fleet and its service offering. Through steady growth and re-investing in itself, LTI built The LTI Group of companies to offer a holistic, turnkey suite of logistics services to its many clients.

LTI continued to grow and expand through the late 90s and early ’00s but like most, if not all companies, it was challenged by the economic downturn of 2008-09. There was still work to be had at this time, but it often came with a lower price tag than it had previously. With drivers being paid a percentage of a job’s total revenue, LTI had to make a choice.

“If we didn’t have drivers then we wouldn’t be able to recover when we got to the other side,” says Randy LaValley, President of LTI. “We sacrificed profit in 08-09 to make sure that our drivers stayed financially healthy, so when the corner turned on the economy we had capacity in our back pocket.”

By taking jobs at a lower rate but increasing the percentage its drivers would be paid, LTI was able to take the economic hit as a company while continuing to support its drivers. This move likely saved the company and kept a number of people employed through one of the worst economic dips in recent history. Coming out of the recession with a solid workforce allowed LTI to expand its operations from general freight to becoming a player in the automotive industry, hauling parts for major automotive manufacturers. The company’s fleet then jumped from 80 trucks to 150; now there are about 240 trucks, with 300 employees spread across the company in various roles.

With a solid team of both younger people new to the industry and seasoned veterans who are not afraid of change, LTI espouses a healthy embrace of new technology. Continuous improvement is a way of life at the company, and with the dramatic increase in scale and business that has happened in the past five months, it has become essential to use new technology to track growing sales and keep tabs on shipments. “You’ve got to keep up with technology and in the last five years, our industry has changed drastically, with electronic logs coming into place,” explains LaValley. “You’ve got to have a lot of technology on board the trucks and in the office that communicates to the client where their freight is.”

Tracking and computer technology are not the only evolving elements at LTI; as a company it is also striving every day to become more environmentally friendly. The company’s headquarters itself recently underwent a site-wide lighting retrofit project that has reduced its electricity usage by nearly 20 percent, and as to its fleet, all the trucks that were used by LTI over the years ran on diesel but this is something the company has been investigating alternatives to for some time now. It has also been incorporating new technology to make the trucks and trailers more aerodynamic, reducing wind resistance thus reducing fuel consumption. The newest trucks in the fleet also boast technology designed to tackle energy consumption when a vehicle needs to be left idle.

“When the truck is running all day long it charges the battery so when the truck parks at night it uses battery power to run the air conditioner,” explains LaValley. “We generate zero emissions when they are sitting there at night in the summertime. When we are heating the trucks in the winter time we have Espar heaters in them, so instead of burning a gallon of fuel an hour we burn 0.8 gallons in a 24-hour period,” he says.

A SmartWay partner, every year, LTI submits a report to the Environmental Protection Agency (EPA), the goal of which is to track greenhouse gas emissions and generally encourage companies to strive for environmentally friendly solutions to meeting their business needs. To that end, LTI is also looking into electric powered vehicles and while they may be a little ways off considering the long distance needs of LTI, it is still a future prospect that excites the company.

When it comes to client services, LTI truly aims to be a cut above the rest and has the resources to back this up. Other transport companies tend to lack the budget for backup drivers and rescue trucks, two things that can make or break a delivery if problems are to arise on the road. Even now, every day that LTI is in business is another day that it is looking for new solutions and ways to tighten all the screws so as to streamline all aspects of the business.

“We don’t want to go in and say, ‘you’re going to hire us because we’re the cheapest,’” says LaValley. “We want a client to hire us because at the end of the day, when they give us a lane doing X number of loads a week, feeding an assembly plant, they can sleep at night knowing that plant isn’t going to shut down… We try to set ourselves apart with service instead of just price,” he emphasizes.

“The more efficiently we run the show, the more competitive we can be and still maintain better than average margins,” says LaValley. “We have grown along the way because we don’t hang our hat on one goal; we don’t say, ‘we’re going to grow to this size at this time and stay there.’ If an opportunity comes across our plate we’ll look at it and if it’s the right fit for our company we will try to capitalize on it,” he shares.

A willingness to satisfy the customer sits first and foremost amongst the philosophy in action at LTI, coupled with a willingness to bend over backward to meet the client’s needs, avoiding short-term seasonal jobs and favoring much bigger jobs that will ensure a client relationship that lasts years and not months. This is evidenced across all aspects of the business, from investing in its drivers to reducing costs and emissions, establishing long-term client relationships, and not only accepting change but actively seeking it out.

If there is indeed a baseline for which to measure respect and dignity for the modern truck driver and the hard work of those behind both the wheel and the desk at home base, one need not look further than LTI.