From Cotton Fields to Desert Gem 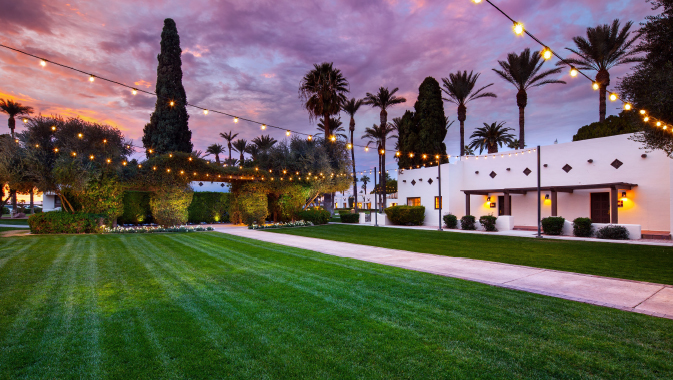 A hundred years ago, the Wigwam in Arizona was an exclusive getaway for high-powered executives. Now it’s one of the state’s largest tourist resorts and a golfers’ delight.

It’s not often that a fabulous resort originates from a tire company, but the Wigwam resort in Litchfield, Arizona, did just that.

At the turn of the 20th century, the Goodyear Tire Company used cotton as one of the components of its tires. Now, don’t expect to find cotton spilling out if you kick the tires on your car, but back in 1916 Goodyear was making cord tires using cotton from Egypt. As you can imagine, that was a long way to ship cotton and the price of the material would also fluctuate.

After doing some research, the leadership at Goodyear found that a part of the West Valley region of Arizona near Phoenix was very similar to the Nile Valley in Egypt. Goodyear actually bought 16,000 acres of land to start growing the cotton for itself. Not only is Arizona good for growing cotton, it happens to have one of the best year-round climates in the U.S. for good living as well.

The company set up its own little getaway spot for executives that (surprise!) included a golf course. The original retreat, that’s now just over 100 years old, accommodated 24 guests. After the Second World War, Goodyear started using different materials for its tires so the company moved on from cotton, and the historic Wigwam resort continued to grow as a destination for golfers and sun seekers. It’s marking its 90th anniversary this year as a luxury tourist resort in the desert—with three golf courses, convention rooms, fine-dining and 8,000 vibrant rose bushes.

“The first iteration of the resort was called the Organization House and the original fireplace was made of horsehair and mud. It is still there functioning in its original form,” says Martin Greenwood, Managing Director of the Wigwam. “One of the original bedrooms is actually my office now. You can sit in there and just feel the history. And that’s something that permeates the entire resort.”

Cultural experiences are becoming the focus of travelers and this is especially true for millennials. This emerging demographic expects more than just a pool and nice cocktail from a resort. Heritage settings like the Wigwam offer more to explore and the chance to get in touch with the history of a community.

“I think that the Wigwam really resonates with travelers,” Greenwood says. “A lot of the artwork in our buildings tells the stories of the area and many of our team members have their own favorite places and their own stories.”

The history is literally on the walls as you walk through the resort. The main lobby window frames were all patterned after Goodyear tire treads popular in the first part of the 20th century.

But as with many landmark sites, the challenge is ensuring that the resort continues to have appeal for guests throughout the years. When the current ownership group JDM purchased the resort in 2011, the group made a significant investment to restore the Wigwam to its full historic significance.

“As they were meeting with the community, they engaged several people for their opinions including the granddaughters of Paul Litchfield, the original founder,” Greenwood says.

“When they toured the property to look at the recently installed artwork, they stopped in front of one particular photograph in the fireplace lounge of children playing in front of the Organization House. One of them started to tear up and said, ‘that’s me and my sister.’ And she went from picture to picture and said that these are our family albums.”

The Wigwam’s exceptional connection to local history is one of the reasons why many guests return year after year. And as the resort celebrates 90 years, guests are certainly getting a taste of what makes the resort a special place. One of the anniversary events is a classic movie series.

“Many people on the resort will actually drive up in their golf carts to take in the drive-in movie experience.”

There’s also Speakeasy Saturdays that take place in a meeting room that was a lounge in the 1920s with inspired food and drinks from the era. For groups and meeting planners, the Wigwam offers “9 Ways to Save for 2019” in honor of the anniversary which includes upgrades, complimentary VIP amenities and discounts.

Ready to pack your bag and your clubs? The Wigwam has 331 rooms on more than 440 acres. It is also the only resort in Arizona with three full golf courses, so that’s 54 holes to try. The courses were designed by Robert Trent Jones Sr., the famous golf architect behind 500 courses here and abroad. After a day on the course, the Wigwam plenty of options.

“We have a farm to table restaurant, Litchfield’s, that is incredibly popular,” Greenwood says. Named after Paul Litchfield, the founder of the surrounding community Litchfield Park, the restaurant menu is sourced from local farms in the valley. “There’s a photo in the restaurant from the 1920s of the resort chefs picking produce to use in the kitchen. So that’s proof that we were farm-to-table before farm-to-table was cool.”

In addition to highly-rated dining, the Wigwam also features three gorgeous pools, nine tennis courts, an expansive 26,000-square-foot LeMonds Aveda Salon Spa, and 100,000 combined square feet of indoor and outdoor meeting and event spaces. And for the family dog, the resort offers plush dog beds, treats, and a pet-friendly patio and menu at Red’s Bar & Grill, one of four restaurants on the premises.

The resort employs about 350 people seasonally. And it is worth noting that, even in the hospitality industry, where turnover is usually quite high, well over a third of the employees at the Wigwam have been with the resort for more than 10 years. “We call them our pioneers, and we celebrate them throughout each year. We have a pioneer dinner in January.”

Among these is 48-year employee, Jesse, a host at Red’s Bar and Grill with the street in front of the restaurant named in his honor. Burgers are the big focus at Red’s and one of the most popular items on the menu is the Jesse Burger. Like its namesake, the Jesse Burger is the all-American classic with lettuce, tomato, onions and bacon. “We do a great deal of business in the local community and our onsite country club has over 500 members. It’s not a stretch to say that Jesse has a personal relationship with just about all of them.”

One of the biggest expectations that people have when they visit any resort is great service. Often it’s how the staff interacts with guest that makes the difference between a potential return visit and a bad review. There’s a story that Greenwood loves to share when talking about how far the team at Wigwam is willing to go for the guests.

One of the booking agents, Carlos Alverez, was working with a convention group that had been returning to the resort for 11 years. “So as Carlos was making a reservation, the conversation turned to cigars and where a guest could get cigars,” Greenwood says. “It turned out that the particular type of cigar was not available at the resort. Carlos on his own, tracked down the specific type of cigar and drove an hour to the far side of Scottsdale to bring them back. So the guest wrote to tell me how this was above and beyond anything that he had ever experienced.”