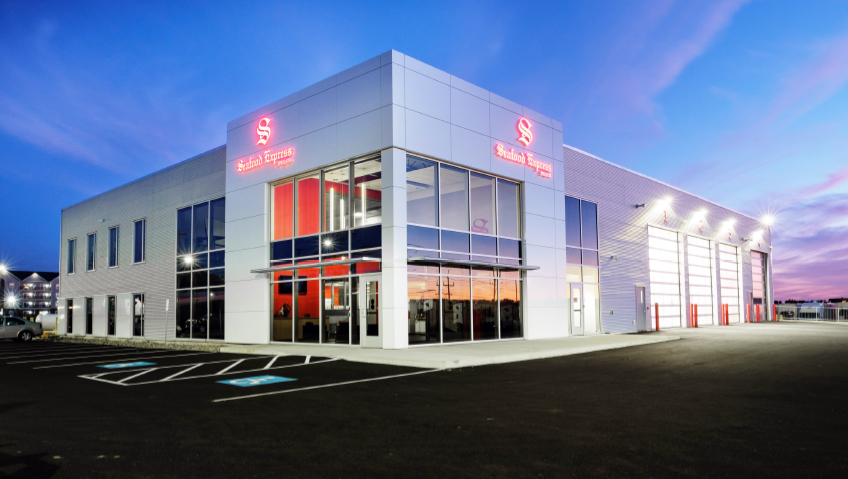 This company offers cross-border refrigerated truckload transport, intermodal/container, and brokerage duties services. While focused on keeping its employees COVID-19-free, Seafood Express Transport is eager to expand its capabilities and geographic reach. The company has also become an industry leader in promoting wellness and diversity.

Despite the firm’s name, “Seafood is only a small percentage of what we haul these days. We haul mostly fresh and frozen food products now… A lot of potatoes and some fish during certain seasons, then everything from produce to fruit and vegetables,” explains Andy Keith, who recently took over from his father as company president.

About ninety-five percent of the company’s loads are transported in refrigerated trailers with a “very small portion of dry freight,” he continues. Seafood Express Transport works with “the big grocers within Canada, the big box stores within Canada… we also do a lot of work with potato brokers on the island.” In addition to food, the company hauls beverages, medicine, tissue paper, and pharmaceutical supplies such as vials and test tubes.

Its container operations involve roughly ten to fifteen trucks and cover both imports and exports. Seafood Express Transport will deliver loaded containers to piers to be loaded on ships or transport containers from ships to inland customers.

In addition to its headquarters, the company operates a maintenance facility with three drive-through bays and a drive-through wash station. Trucks are kept in optimal running condition, with new vehicles constantly added to the fleet.

“Our trucks and trailers have a certain lifespan, and it’s kind of a continual investment every so often in replacing trucks and trailers. We like to keep our trucks pretty new, so we replace them every four to five years. Over the past three or four years, our fleet size has grown from about fifty trucks to now seventy-five, and our trailer bank has increased from about eighty-five to now 135,” says Keith. The company owns about ninety percent of its trucks, with the remainder being leased vehicles.

Seafood’s trucks are fitted with advanced two-way dash-cams, GPS systems, and sensors. Trailer monitoring software allows staff to keep a close watch on trailer fuel and temperature levels, mileage, idle time, and location. Maintenance staff “usually know there’s a problem with a reefer unit before the driver does,” and can alert the trucker to mechanical issues, he says.

The company’s head office has also become a technological hub. In recent years, it has “invested a lot into new operating software that does everything from daily operations, dispatching, our accounting. It keeps our customer lists up to date, tracks staff profiles. There are different modules assigned to it. There’s a safety compliance module, there’s a repair module and a maintenance module. We schedule all our trucks and keep track of all our inventory through it,” says Keith.

The company has come a long way, given its humble roots. Seafood Express Transport was founded in the late 1970s, and Keith’s father Bill then acquired it in 1986.

“When my father bought it, the company only had six or seven trucks and was almost exclusively hauling fish. He ran it until January 1, 2021, when I took complete ownership of the company,” says Keith, who worked at Seafood during summers and on a part-time basis when he was younger. His father remains active in a consultative role, even in retirement, he says.

He wants to keep the company within the family. At the moment, a brother-in-law and a sister-in-law also work with him.

Before COVID-19, Seafood Express Transport was looking into potentially hauling more dry freight. Dry vans were secured, and business was lined up, but COVID-19 restrictions put this venture temporarily on hold. It was also thinking about expanding its brokerage operations.

Although expansion efforts have been halted, the company was well-prepared when the pandemic hit last March, says Keith. Thanks to its investment in technology, office staff who wanted to stay at home could work remotely with minimal difficulty.

Maintenance staff and drivers cannot work from home, however. Drivers were issued with hand sanitizer, face-masks, rubber gloves, and other PPE safety equipment to keep them infection-free on the road. Maintenance crews were given personal protective equipment to wear when cleaning and working on vehicles. The company also redesigned its office, moving desks to maintain a safe distance apart and putting Plexiglas barriers in place.

As it delivers food, Seafood Express Transport was deemed an essential service and did not have to shut down during the pandemic. Still, COVID-19 caused a spike in expenses. A few of the company’s customers ran into cash flow problems, equipment parts became difficult to acquire due to long delays, and drivers faced long delays while waiting for paperwork to clear, etc.

Traditionally, Seafood Express Transport staff made a point of visiting customers in person to touch base and discuss business. Such meetings are now done over the phone or online.

Keith says he used to encourage staff to attend conferences and trade shows to “gain more knowledge in a specific niche – whether human resources, maintenance, etc.” Most of these events have been shut down or have gone digital for the time being.

He has big plans once the pandemic lifts. “We want to extend our freight network. We don’t really haul too much of anything west of Ontario in Canada. We don’t do a lot in the western United States.”

He is proud that the firm pulled together during the worst of COVID-19 and that the company did not have to lay off any of its staff. The company’s loyalty to its workforce has been recognized with an Employer of Choice award from the Trucking Human Resource Sector Council Atlantic last year, and it has earned this honour for the past four years, says Keith. In 2018, Seafood Express Transport also took home an Excellence in Business Award from the Greater Charlottetown Area Chamber of Commerce.

Including drivers, Seafood Express Transport has roughly 120 employees. Keith sees the size of his company as an advantage. Being small and flexible, it is easier to pivot in the face of new challenges or opportunities compared to larger carriers, he explains.

And certainly, there is no lack of challenges to overcome, including the continent-wide driver shortage. The industry is in the middle of a demographic crunch, with an ageing workforce and not enough young people replacing retiring drivers and certified technicians.

“We’ve invested a lot of money in recruiting over the last five years. We didn’t have a full-time recruiter before. Now we do,” he states.

As a proud board member of the Atlantic Provinces Trucking Association and the PEI Trucking Sector Council, Keith and his colleagues are working hard to ameliorate the driver shortage. Industry associations have teamed with educators and have launched initiatives to raise awareness of trucking sector opportunities. Trucking groups are also trying to entice young people by highlighting how computerized the sector has become.

Seafood Express Transport has become something of an industry pioneer when it comes to promoting wellness in the trucking sector. The company recently launched a podcast, available for anyone to view, featuring interviews with truckers, driving tips, and discussions about mental and physical health. Called The Express Lane Podcast, this new media venture has been well-received, says Keith.

“We interview a driver and ask how they get along with challenges they face on the road. We’ll interview registered dieticians for tips to drivers to stay healthy on the road.”

The podcast is a natural outgrowth of the company’s efforts at maintaining a healthy workforce. It also provides free fruit for employees, has a fitness center at its terminal that staff can access at any time, and holds after-hours seminars by qualified speakers about health topics. Seafood Express Transport has a multicultural workforce and hosts regular diversity training events too.

“A lot of people think trucking is this rough and tough macho kind of environment. That’s not the culture we’re breeding here internally. It’s something that carriers and vendors need to pay closer attention to – the well-being of their staff – if they want their staff to be productive and efficient,” states Keith.